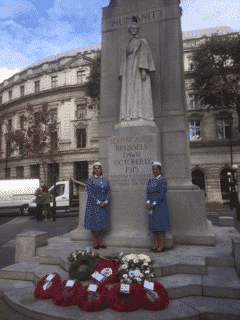 As Master, I was honoured to represent the Guild of Nurses during the annual wreath laying ceremony held in front of the statue of Edith Cavell in London, at the invitation of The Cavell Nurses Trust. The event commemorates the memory of Edith Cavell (1865 - 1925) and is held every year on 12th October, the day she was shot as a spy during the First World War.

Amongst the many representatives from nursing and other organisations who laid wreaths, two Nurses from the Royal London Hospital laid a wreath dressed in their traditional uniform, a custom that dates back to 1920.  Edith Cavell's final letter to her nurses was read by Dame Christine Beasley. In a more modern irony, the start of the ceremony was delayed when the two uniformed nurses rushed to the aid of a gentleman who collapsed nearby.  The gathered assembly sang Abide with Me, the hymn chosen by Edith Cavell just before she died, and their voices were accompanied by the siren of the ambulance called to help the patient on his way to hospital. I cannot help thinking that Edith Cavell herself would have approved!

Edith Cavell was a British nurse during the First World War. She is celebrated for saving the lives of soldiers from both sides without distinction and in helping over 200 Allied soldiers escape from German-occupied Belgium. The Guild of Nurses is delighted to be associated with the Cavell Trust which gives support and financial help to nurses in need.  www.cavellnursestrust.org