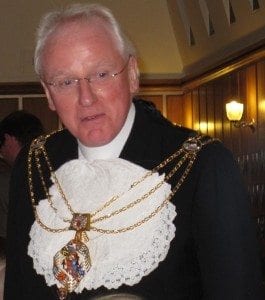 Our sponsoring Alderman, Sir Andrew Parmley, is a former Sheriff and Lord Mayor of the City of London.

Sir Andrew is the Chief executive of the Royal College of Organists and Principal of the Harrodian Senior School in West London. As Lord Mayor, his mission for the City was to promote Education, Training and Qualifications across the full spectrum of disciplines, whilst fully supporting the financial, commercial and business City.  He is keenly involved in culture and the creative industries and promotes diversity, particularly the importance of immigration, and Fair Trade. Between 2015 and 2018, he was a member of the Government’s Apprenticeship Delivery Board.

Sir Andrew was elected a Common Councilman for Vintry Ward in 1992 and became its Alderman in 2001. He has served on many of the committees of the Corporation of London and has been Chairman of both the City of London School for Girls and the Guildhall School of Music & Drama.  He is a Past Master of the Parish Clerks’, Musicians’ and Glass Sellers’ and Vintners’ Companies and for almost forty years has been Honorary Organist of the church of St James Garlickhythe in Vintry Ward. He is also a Court Member or Honorary Liveryman of several additional companies.

Having succeeded the City’s only medical Lord Mayor, Sir John Chalstrey, Sir Andrew is a huge supporter of the nursing profession and we are very honoured to enjoy his sponsorship. In recognition of his contribution, the Honorary Freedom was conferred upon him in May 2016.  As we go forward, his vast experience and support will be critical to our future success and are very much appreciated.