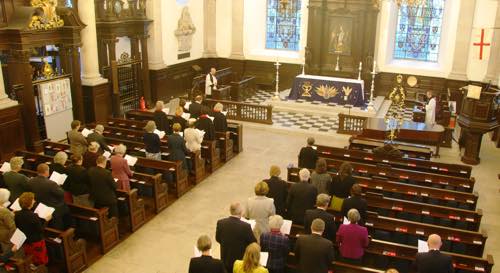 St Lawrence Jewry situated in the Guildhall’s yard is the official church of the Lord Mayor of London and the City of London Corporation. Dating back to 1135, this was the ancient setting for the first annual church service for The Guild of Nurses.

The Vicar, the Reverend Canon David Parrot, welcomed the 74 strong congregation. This included members of the Guild, Freemen and those who were due to declare after the service and their guests. The service was conducted by the Guild’s Chaplain, the Reverend Canon Charles Pickstone. and the organ was played by Catherine Ennis.

The introit anthem, ‘Oculi omnium’ was sung by the choir as the Beadle led the procession of Wardens and Master resplendent in their scarlet and black cloaks, to their places at the front of the church. The replica Scutari lamps which have become part of our Guild’s tradition of charity and friendship, were carried by two of the Wardens.

The first lesson from the Old Testament was read by the Middle Warden, Liz Turnbull, and Col Jane Carey-Harris read a moving extract from ‘Wounded: The Long Journey Home from the Great War’ by Emily Mayhew. The sermon was preached by the Guild’s Chaplain who drew the two themes of God the good shepherd caring for all, and the realities of present day conflicts where solutions are hard to find but all acts of caring can make a difference.

Reflecting on the 100th anniversary year of the Battle of the Somme, special tribute was paid to the work of nurses in difficult and dangerous circumstances, particularly in the theatres of armed conflict,

During the last hymn the collection was taken by two Court Assistants. The monies will be allocated to St Lawrence Jewry as well as the Guild of Nurses.

The service concluded with the Beadle leading the Master, Wardens, and Clergy to the vestry during the Recessional Voluntary ‘Te Deum’, before the congregation made their way to the Guildhall for the third Declaration ceremony.

It was a beautiful and dignified service which gave us much to ponder. 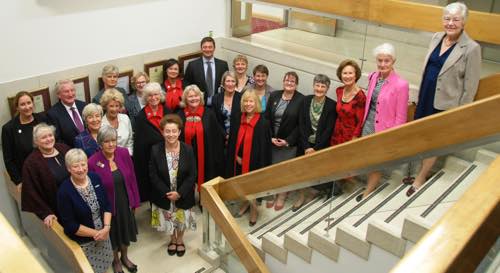 We moved on to Guildhall and the Beadle led the procession of Master and Wardens to their places. The Learned Clerk introduced the proceedings with19 Freemen making their Declaration and signing the register. The Master spoke about the founding of the Guild and its ethos and there were opportunities for photographs before wine and a delicious fork supper were served. The guests were the Master and Clerk of the Tax Advisors who offered positive words of support and encouragement for the fledgling Guild. We have been delighted by the welcome we have received from the City and the other Livery members, and especially encouraged by their good wishes for our continued growth and success.

The atmosphere of fellowship was palpable and it was a fitting end to a very special day in the Guild of Nurses calendar.