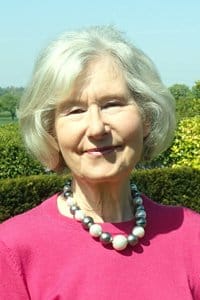 Rosemary Ray trained at the Middlesex Hospital and in the 1990's qualified as a Reflexologist specialising in treating patients undergoing chemotherapy while continuing to work as a nurse part time.  She became a volunteer for Iain Rennie Hospice at Home giving patients reflexology and being a part of the support network for their families.

As a member of the Company of Nurses, Rosemary looks forward to this new role.

The role of Almoner remains an active and important office in many of the Livery Companies of the City of London.

The word 'Almoner' is historic and started as being the title given to a Chaplain or Church Officer who was in charge of distributing money to the deserving poor.  There are still many Alms Houses in existence throughout the United Kingdom many supported by Livery Companies.  Within hospitals, the 'Almoner' was originally responsible for determining the amount due for a patient's treatment, this later became a welfare role, providing support to the patients, their families and all members of staff.

Today the role within the Company of Nurses remains one of concern and compassion for the welfare of all of the members and their families in times of bereavement, illness, severe financial difficulties and other stressful circumstances and to maintain contact with widows and widowers of former members.

This can be achieved by sending a card, a letter, email or contact by a telephone call, to provide a caring and confidential listening ear and to determine how best to provide assistance and support when sought.  Further help can be accessed, with the members'  permission, from the Clerk and Chaplain.

In times of celebration, it may be appropriate to send flowers or a card of congratulation.

As part of the supportive role, The Company of Nurses has set up a team of volunteers who have contacted all members who are 'over 70' and possibly self-isolating, to have a friendly 'chat' and to give continued contact if requested during the Covid-19 pandemic.

Support is also available to those members who are experiencing the extra stresses of working on the 'front line'.

Rosemary can be contacted through the Company's Honorary Clerk: honoraryclek@companyofnurses.co.uk