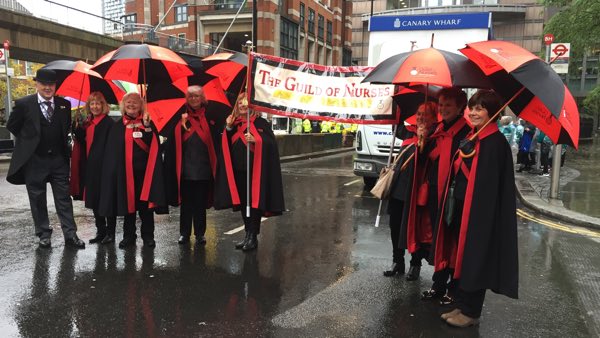 A first appearance for The Guild of Nurses at the Lord Mayor’s Show! Marching behind the beautifully embroidered banner made by Liz Turnbull, as Founders of The Guild, we wore our robes modelled on traditional nurses cloaks with our distinctive red and black umbrellas. The response was fantastic, particularly  from fellow nurses cheering us on from crowds.

We followed The Cook and Butler barbecue float, handing out much appreciated sausages as we paraded through the City of London. A ballot was held amongst the Freeman of our Guild for the 12 places in the St Paul’s Grandstand, courtesy of our Sponsoring Alderman and now Lord Mayor of the City of London. It was such an honour to be a part of Dr Andrew Parmley’s special day. 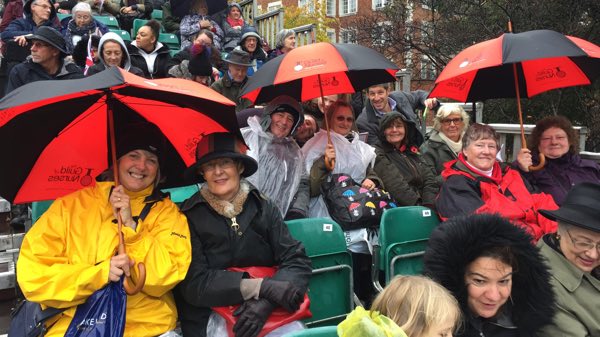 Our Freemen in the Stands

Master of The Guild of Nurses, Brenda Griffiths said:
"I was absolutely thrilled to see The Guild of Nurses taking their place in The  Lord's Mayor's Show. We walked with pride as we represented nurses from all around the Country in this magnificent annual parade and celebrated the contribution nurses have made in the City and in the lives of people in our care"

The comments we received from everyone participating and watching showed the immense honour we all felt to be part of this very special day:

"It was an honour to be able to represent the nursing profession as a member of the Guild of Nurses and take part in such a historic event as the Lord Mayor's Show.It was an amazing day."

"The intention of The Guild is to connect members of the nursing profession. Being part of this historic occasion not only placed us clearly in the City of London's history, but also we connected to the many nurses who were in the crowds enjoying the Lord Mayors Show. It was a truly exciting day"

"It was a real privilege to walk with my fellow colleagues in the Lord Mayor's Show representing our profession. To be part of such a historic occasion was a wonderful opportunity and one that I shall remember for a long time."

"It was an honour to represent the Guild of Nurses as part of the Lord Mayors Show, the Guild has come so far in just eight months. The umbrellas and gowns were striking and the banner made by Lizzie amazing."

"I felt very privileged to take part in this ancient event. There was a wonderful sense of freedom walking through the City being able to smile and wave to the cheering crowds. It gave a pride for our history and hope for the future."

"It was with admiration and emotion that I cheered the Founders of the Guild of Nurses as they walked past. What an achievement to have gained Guild status and to be part of the Lord Mayor's Show"

“It was a great pleasure to support the Lord Mayor's Show and, in particular, the Nurses Guild. It was a very enjoyable event, despite the somewhat inclement weather - rain can't dampen the spirit of our Guild members! 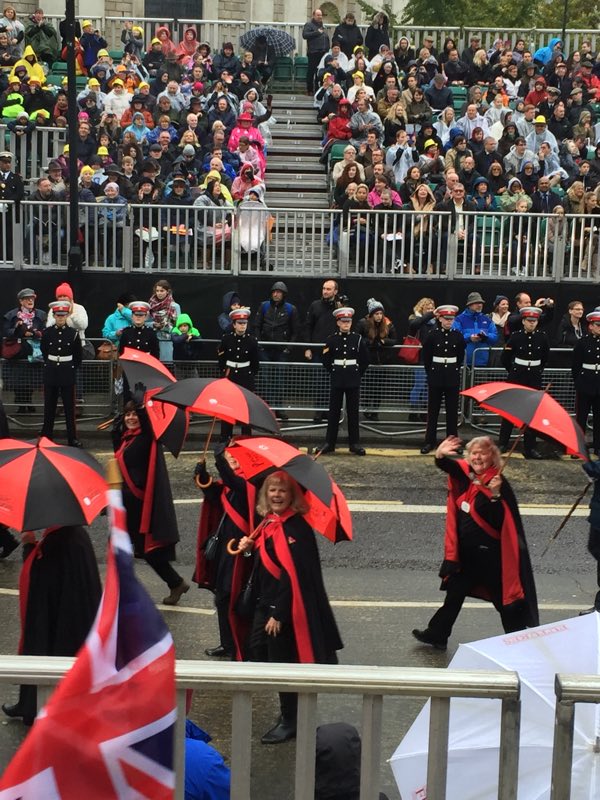 "What a privilege to watch the Lord Mayor's Show from the Grandstand with St Pauls Cathedral as a backdrop,  thanks to our sponsoring Alderman and new Lord Mayor of the City of London, Dr Andrew Palmley. And how wonderful to see the new Guild of Nurses represented by its Master and Wardens looking spectacular in their red and black robes and with matching umbrellas. Worth every minute of sitting in the rain!"

And from one of the many watching the Lords Mayor's Show from home:

"As observers of the Lord Mayor’s Show from the warmth of the fireside, we were impressed with the diversity of the Livery Companies, the variety of their robes and regalia and the thought and energy they put into their floats and displays.  It was wonderful to watch.  We were delighted to see Andrew Parmley and now Lord Mayor, our Sponsoring Alderman, in his finery and travelling in the Golden Coach.