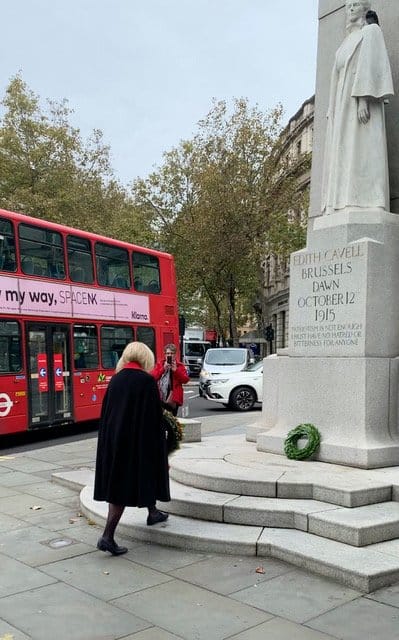 Edith Cavell, who trained as a nurse at the Royal London Hospital, was executed by a German firing squad on the 12th October 1915. She had been found guilty of aiding the escape of Allied prisoners from occupied Belgium during WW1.

The memorial to her, which stands in St Martins in the Field London, was unveiled on the 12th October 1920 and every year since then - for 100 years - nurses from the Royal London Hospital have laid a wreath in her memory. Edith Cavell was quoted in 1915 as saying: “I must have no hatred or bitterness towards anyone”.

I was honoured and delighted to lay a wreath at the memorial on behalf of the Company of Nurses.  In previous years there has been a service and ceremony in front of the memorial but this year, just a few of us participated without ceremony or words, which added to the solemnity of the occasion.

The Chair of the Cavell Trust laid a wreath from the Cavell Nurses Trust and the Chief Nurse of Barts Health, Caroline Alexander and Bereavement Officer, Ros Butterfield laid a wreath on behalf of the Royal London Hospital. Several members of the public stopped to watch and to ask about Edith Cavell. I felt very proud of the rich heritage we have in our nursing profession and respect for someone who demonstrated such bravery and compassion.

The Company of Nurses Charitable Trust fund has worked closely with the Cavell Trust over the past 4 years, to support to nurses in need from all over the country. The partnership will continue to provide the benevolence and help which is so important, particularly in these challenging times for all nurses, everywhere.