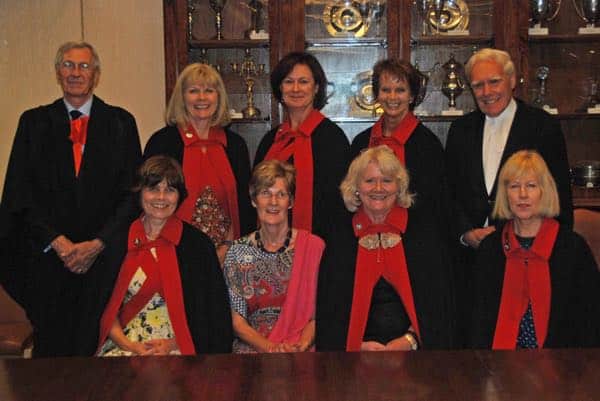 Last Thursday Elizabeth Bardolph (front row, second from the left), became the first Freeman from the newly formed Guild of Nurses to receive the Freedom of the City of London.

The Chamberlain’s Court Room in the historic splendour of the Guildhall, was the setting for the ceremony where Elizabeth was presented with a framed copy of the Freedom together with a book entitled ‘Rules for the Conduct of Life’.

The ancient ceremony which dates back to 1237 ended with Murray Craig, Clerk to the Chamberlain's Court, offering Elizabeth the 'right hand of fellowship', and greeting her as ‘a Citizen of London’.

After the ceremony Elizabeth said, "It was a very special and memorable occasion. I feel  privileged to be given the Freedom of the City of London and it is an  honour to be a Foundation Freeman of The Guild of Nurses which will leave a lasting legacy for all nurses around the Country."

The granting of the Freedom of the City is neither an award nor honour and can be obtained through right of patrimony, servitude or by redemption.  It has a long tradition dating back to mediaeval times when craftspeople formed trade guilds for the purposes of checking quality control and fair pricing, as well as looking after their members’ welfare.  Penalties were imposed on those who transgressed.  In the City of London the guilds became livery companies, so named because of the distinctive clothing or livery which each guild wore.

The Guild of Nurses was recognised by the Council of Alderman in February 2016 and is the first step towards the nursing profession joining the other noble professions represented in the Livery movement.

In order to regulate and control the livery companies the City of London required that all liverymen be Free of the City.  In return for their substantial fees, Liverymen were exempted from paying market and bridge tolls and were permitted to have a say in the running of the City.  However, from 1800 the traditional ways of working became untenable although the City retained the admission to the Freedom of the City for liverymen.  Since 1835 non-liverymen with an interest in the City are able to apply.

Although the Freedom enables greater participation in the life of the City, it is not something which may be advertised or used for increased status or gain in any way.  Its appeal lies in being able to take part in and ensure the longevity of an established tradition.