The London Docklands museum is a fascinating place and I was privileged to spend a wonderful afternoon there with the Guild of Nurses.

It is housed in one of very few original buildings and was working as one of the busiest warehouses from 1802 right up until the advent of containerships. At that point the dock was too shallow and no longer suitable and so closed in 1980, with the shipping moving to Tilbury. The heyday lasted from the colonial days right up until the 1960s.

Our guide was a fount of knowledge! His father had been a docker and so he offered a unique perspective as to the hardships experienced. He enlightened us with all sorts of nuggets – including the fact that the word Wharf is merely an acronym for WareHouse At River Front!

The dock was primarily used for rum, sugar, ivory and rubber and then elevated to be suitable for tea as well. Sugar was referred to as white gold.

Horrifically, London was the 4th most important slave trading port. During the colonial period goods were shipped from the UK to Africa, where one barrel of rum costing £6, could be traded for a slave. The ship then loaded with its human cargo, sailed on to the sugar plantations of the Caribbean – whereupon they unloaded any surviving slaves and restocked with further sugar, nutmeg, coffee, tobacco and rum for the UK.  A truly barbaric trade.

The East India Company, imported chintz and muslin from India and tea from Canton in China, thus introducing tea to England. The Company became so powerful it had its own army.

Life was cheap as a docker and health and safety, non-existent! There was a makeshift hospital on-site, or alternatively casualties were transferred to Poplar (as in Call the Midwife!). The Poplar hospital also had a decompression chamber, which was critical for people digging the Blackwall tunnel at that time.

Dave’s father would move from loading sugar (which became stuck to his back and required his mother to soak his shirt from his damaged back), to loading lime from cement – which then soaked into the dockers’ damaged backs and then to freely packed asbestos! None of which were good for their health!

Dockers also carried their own dock hooks in their trousers and if they tripped, the hook frequently pierced their femoral artery and killed them. The street below the warehouse was known as blood alley. Other horrendous accidents included falling in grain or slipping off loading boards.

Our guide was particularly keen on imparting knowledge about criminal activity on the river and in the docklands. He discussed various punishments including the notorious gibbets that would be displayed around London as a warning deterrent to other would-be criminals.

The museum takes you on an incredible journey from the 1800s, through the slave trade and into the war. Sadly, on our tour, we only skimmed the surface, as you could easily spend a whole day there. The Docklands was integral to the UK war effort and consequently a major target for bombings. It bore the brunt of enemy attack during World War Two and played a vital part in the fight back. It was from the Docklands that many of the boats were launched that assisted in the evacuation at Dunkirk in May 1940.

On the 7th September 1940, the Blitz began and continued unremittingly for the following 13 weeks. Docklands and riverside factories diversified. Tate and Lyle manufactured aeroplane parts as well as refined sugar. Cable works designed a unique underground network of pipes which enabled boats to refuel whilst out in Normandy. During the war over 23,000 vessels and craft were converted, maintained and repaired at the Docks.

Whilst at the museum, we were privileged to be awarded the unique opportunity to see a 1940s diary, written by a nurse serving on the River Emergency Services. It was written by Aileen Moore and her niece Rosemary Moore, was one of our party and had donated the diary to the museum. The archivist read an excerpt where Mr and Mrs Churchill visited the docks after the Blitz, to survey the damage and boost morale. 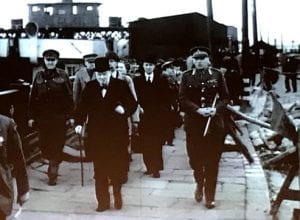 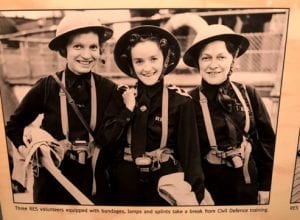 Volunteers with the River Emergency Service 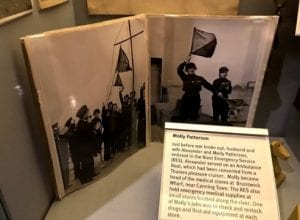 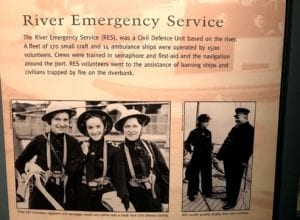 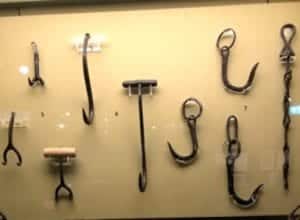 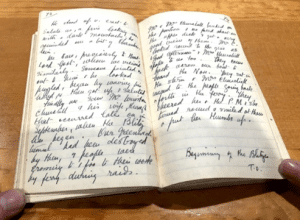 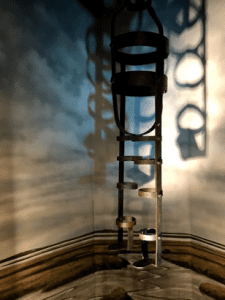 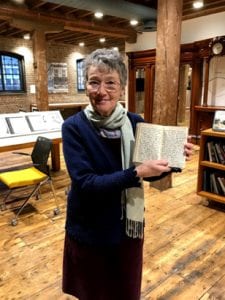 Rosemary with her Great Aunt's diary