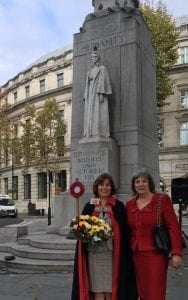 Our Master, Helen Pickstone was amongst those invited to lay a wreath to commemorate the anniversary of Edith Cavell’s death in 1915. Edith Cavell, a British nurse, was executed after helping hundreds of allied soldiers escape captivity in the First World War. Eight Other wreaths were laid including one by the Belgian Ambassador.

Helen also read the First World War poem: Night Duty by Eva Dobell (1867-1963) who was a British nurse serving in many hospitals during the war. It was known she also wrote poems about some of her patients.  The poem read by Helen can be seen at: https://allpoetry.com/Night-Duty

Photo: Helen Pickstone with Susan Osborne, fellow Freeman of the Guild and Trustee on the Board of the Cavell Nurses’ Trust.