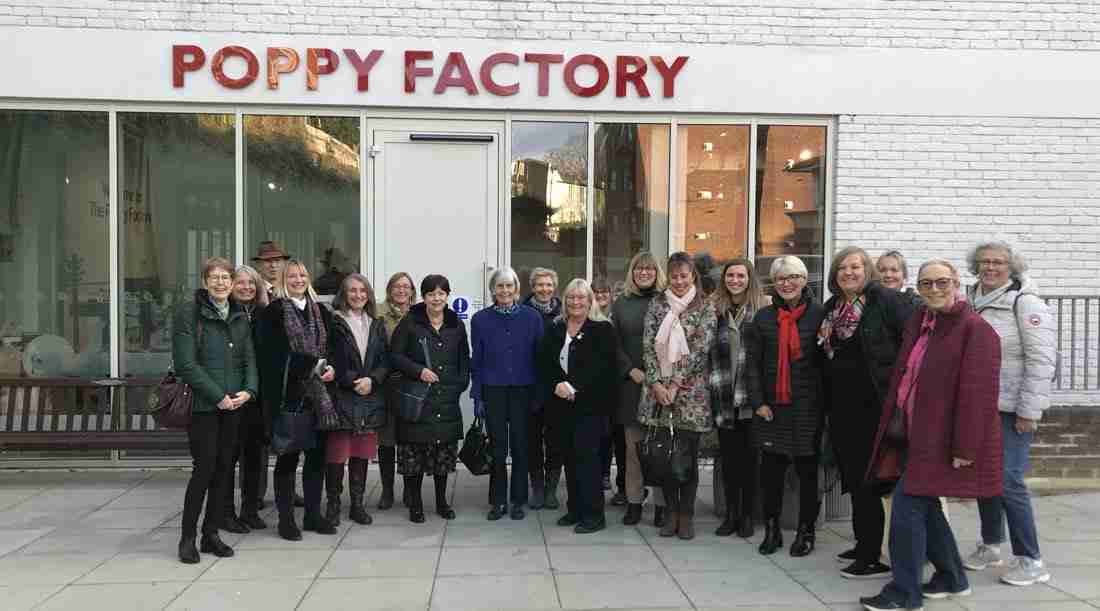 We had a wonderful visit to the Poppy Factory and learnt about its fascinating history and the great work undertaken by them.

The Poppy Factory was founded in 1922 by Major George Howson MC, a British Army officer in the First World War and winner of the Military Cross in 1917. George Howson’s vision for the charity was to provide employment for veterans injured during the First World War. Originally the Poppy Factory was located in the Old Kent Road, however it quickly outgrew that space, so an old Brewery was purchased and the factory relocated to its current location at Richmond.

The veterans at the Poppy Factory make the wreaths for the Cenotaph including those for the Royal Family which are collected and re-used every year.  They are also responsible for the Field of Remembrance outside Westminster Abbey and in addition, they make the poppy surround for the Tomb of the Unknown Soldier. The British Legion poppies are now made by machine at a separate location.

Today, the Poppy Factory supports hundreds of veterans with health conditions in England and Wales on their journey into employment, helping them to overcome any barriers. Four out of five of the veterans they work with report a mental health condition. Whatever their situation, and whatever they are going through, the Poppy Factory’s employment team is on hand to offer one-to-one support.

We thoroughly enjoyed our tea and cake! Special thanks to Alice for liaising with Christine to arrange our visit and to Jeff for making us so welcome.

To see the full version of this report, including a history of the Flanders Poppy, please login and visit the Freemen’s Noticeboard