We had a wonderful visit to the Poppy Factory and learnt about the fascinating history and the great work undertaken by them.

The Flanders poppy is unusual, in that it can lie dormant for many years and then swiftly bloom when the ground is disturbed and conditions are right. During the First World War, the devastation led to the poppies proliferating across the battlefields.

The soldiers connected with the poppies and they came to symbolise the losses on the battlefields.

The Canadian Lieutenant-Colonel John McCrae wrote the famous war poem, ‘In Flanders Fields’, following the death of his best friend. “If ye break faith with us who die, we shall not sleep, though poppies grow in Flanders Fields”.

Moina Michael, an American Professor was working to support injured veterans and realised the importance of work in veteran rehabilitation. Moina decided to start selling silk poppies, made by veterans to raise funds. This later became the Poppy Appeal.

Anna Guerin, a French artificial flower seller, employed wives and children of French veterans to make poppies. She sold these in New Zealand, Australia, Canada and Britain and was so passionate about the importance of her campaign that she initially funded it herself. It raised £106,000 and outstripped the French supply.

Earl Haig from the British Legion recognised the need to find a British supplier. Thus the Poppy Factory was born to provide rehabilitation and support for British Servicemen and their families. 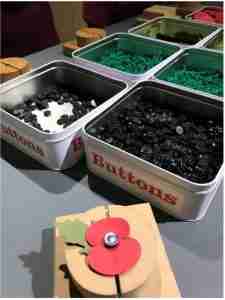 The Poppy Factory was founded in 1922 by Major George Howson MC, a British Army officer in the First World War and winner of the Military Cross in 1917. George Howson’s vision for the charity was to provide employment for veterans injured during the First World War. Originally the Poppy Factory was located in the Old Kent Road, however it quickly outgrew that space so the old Brewery was purchased and he factory relocated to the current location at Richmond. The Poppy Factory was able to help injured veterans recover and rehabilitate and Howson built flats on-site for them to live in. To qualify, they originally had to be at least 80% disabled and the main breadwinner for their wives and dependents. At its busiest they had 100s of servicemen working there and a pub and cinema provided entertainment.

Howson had an engineering background and used his skills to create simple gadgets to enable the severely injured servicemen to be able to make poppies, even with just one hand. 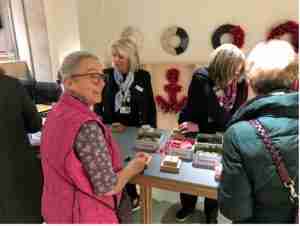 Our fabulous guide Minna teaching us to make our own poppies.

The veterans at the Poppy Factory make the wreaths for the Cenotaph including those laid by the Royal Family. They collect these and re-use them every year.

They are also responsible for the Field of Remembrance, outside Westminster Abbey.

In addition, they make the poppy surround for the Tomb of the Unknown Soldier.

The British Legion poppies are now made by machine at a separate location. 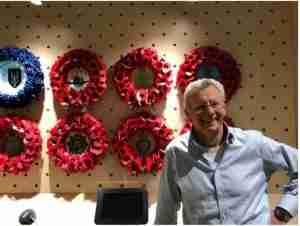 Today, The Poppy Factory supports hundreds of veterans with health conditions in England and Wales on their journey into employment, helping them overcome any barriers.

Four out of five of the veterans they work with report a mental health condition.

Whatever their situation, and whatever they are going through, the Poppy Factory’s employment team is on hand to offer one-to-one support.

To find out more or to make a donation, visit www.poppyfactory.org

With special thanks to Alice for liaising with Christine to arrange our visit and to Jeff for making us so welcome. We also thoroughly enjoyed our tea and cake! 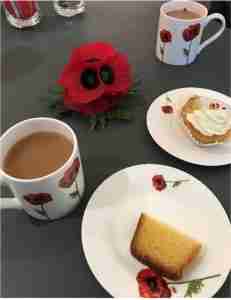