Did you know that chocolate digestives go very well with cheese? Just one of the pieces of information we received during a tutored cheese tasting with Arthur Alsop of Alsop and Walker cheese makers from East Sussex.

Over thirty of us together with partners, sat in front of our screens with a selection of seven cheeses which had arrived by courier. It had been suggested we had foil, garlic, thyme and a knife. But looking at the zoom pictures wine, mostly red, crackers, some bread and other necessities had also joined the party. We freely went on and off mute and people asked lots of questions. 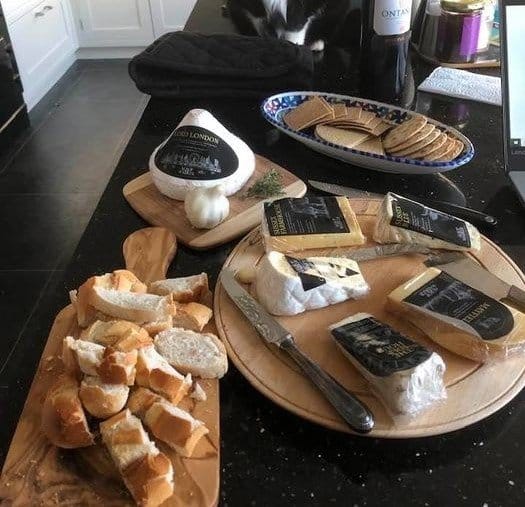 Mags, Arthur's partner, guided us through stuffing our Lord London cheese and putting it in the oven – while it baked, we watched a video about cheese making. We saw the cows in the field, the milking parlour with each cow knowing which stand is its own and making their own way to it for milking! Once the milk is pasteurized, the whole process begins. Incredibly some cheeses are still made with the whey being cut manually with the cheesemaker plunging his arms right into the mixture. The cheesemakers sterilise their arms constantly. When this was questioned – they dip their arms constantly in dilute bleach and there was a follow-up comment; “I hope you have a dermatologist available”! The hard manual work continues with the cheesemaker hauling cheeses in and out of vats, and subsequently storing it in particular areas, where the cheese needs turning on a regular basis.

We ate our Lord London cheese with bread or carrots dipped into the delicious melt as we were guided through the different cheeses. Mayfield is their most popular cheese, most suitable to use in cheese sauces and quite delicious. Sussex Farmhouse is the best for cheese souffle. Again they came back to those chocolate biscuits! The blue cheese can be mixed with a little port or Madeira and spread on crackers and served alongside chocolate digestives.

The Idle Hour cheese was named after a bar run by a friend in London. Lord London was created for the London Olympics and was served at the wedding of the Duke and Duchess of Cambridge. The mould for the blue cheese comes from Rochefort, the cheesemaker chooses the right mould for their taste and that is sent over each time. Cheese made with milk produced in the winter is the best. All the time we enjoyed tasting and eating all our cheeses with their different tastes.

It was a really fun evening, lots of laughter all round. The chat box had many comments from 'Blessed are the cheesemakers', from the Life of Brian, to 'bang goes my diet', 'starvation for the weekend'. Everyone seemed to enjoy themselves, there was also one dog I know who waited for any scraps.

Thank you to the social committee for arranging such an amusing evening and for giving me the opportunity to learn so much more about cheese.