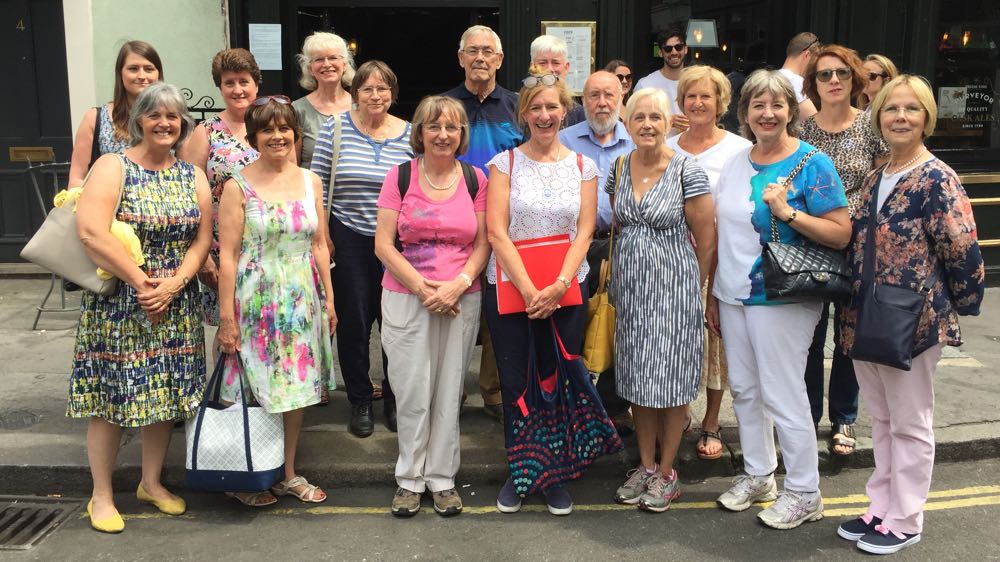 On Saturday 8th July,  16 of us joined up with Blue Badge Guide Mo Corcoran and despite London being very busy because of the Pride march we were able to explore quiet hidden back streets of Soho and Mayfair to discover some of the history of Rock n' Shop .

It was a fascinating walk with many highlights which included; where Paul McCartney met Linda at the Bag o' Nails Club in Kingly Street and the site where David Bowie was photographed for the album cover of Ziggy Stardust in Heddon Street. As well as seeing one of the oldest bespoke tailoring company Gieves and Hawkes in Saville Row, next door we were able to view, in what is now an Abercrombie Kids shop, Beatles memorabilia including a guitar signed by Paul McCartney in the building where they played their famous last concert on the roof in 1969. We walked through the sedate and beautiful Burlington Arcade; seeing very “up market” fashions in the world's oldest Arcade. After walking through Shepherds Market area where the photo was taken we ended in The Vault of Hard Rock Cafe in Piccadilly; full of rock treasures such as Jimi Hendrix guitar and Madonna's Jean Paul Gaultier bustier.

Mo is planning another walk for The Guild of Nurses through Medical London on 23rd September.