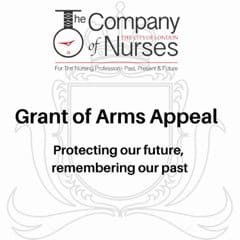 Protecting our future, remembering our past

The Company of Nurses has reached an historic moment in progression to Livery status, in that we are now in the wonderful position to be able to petition for a Grant of Arms to represent the Company in perpetuity. The process is costly and today we are launching an appeal for donations. Funds raised will initially support the petition for a Grant of Arms as this is a first step in preparing for our progression. Any funds raised in excess of the cost of the Coat of Arms will go towards further items that will be required as we progress such as badges of office and gowns, which will bear the Coat of Arms.

The award of a Grant of Arms will signify that The Company of Nurses is recognised as a worthy and respected body which will strengthen our ability to promote our profession and enhance our membership within the livery community.

The arms and crest are granted by Letters Patent issued by the most senior heralds, the Kings of Arms. The first step is for one of the officers of arms to submit a petition, or a memorial as it is known, to the Earl Marshal. Once permission is given the Earl Marshal will issue his Warrant to the Kings of Arms, which is when the design process will commence. The Kings of Arms have complete discretion over the design, but our wishes will be considered. We will receive a sketch for comment and once agreed it will be checked against all previous arms on record to ensure that it is unique. It is then submitted to the Kings of Arms for approval. The arms to be granted will then be painted onto vellum by a College of Arms artist. The text is then added by a scrivener after which, it is signed and sealed by the Kings of Arms. The Company of Nurses will then have a beautiful, illuminated Patent and of course, our own arms and crest.

The appeal is separate from and unrelated to our own benevolent giving to the Company of Nurses Charitable Trust. Donations made in support of this appeal are ineligible for Gift Aid.