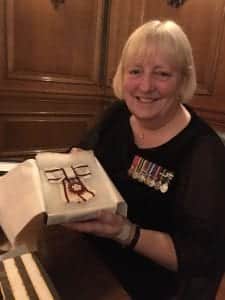 One of our Freemen Colonel Jane Davis OBE QVRM TD DL RGN has been appointed as the Vice Lord-Lieutenant for Greater London, Jane has been a Deputy Lieutenant since 2008.

The title Lord-Lieutenant is given to the British Monarch’s personal representatives throughout the United Kingdom, usually in a county or large city (metropolitan area). They have performed various tasks throughout history including raising local militia units and numerous ceremonial duties.

The Greater London Lieutenancy as well as supporting the Monarch and the Royal Family in Greater London, is a bridge-builder, connecting individuals, organisations and social networks, to enhance Londoners’ sense of belonging and therefore, increase social inclusion within the capital.

Jane has also been Liveryman of the Worshipful Company of Blacksmiths since 2012.