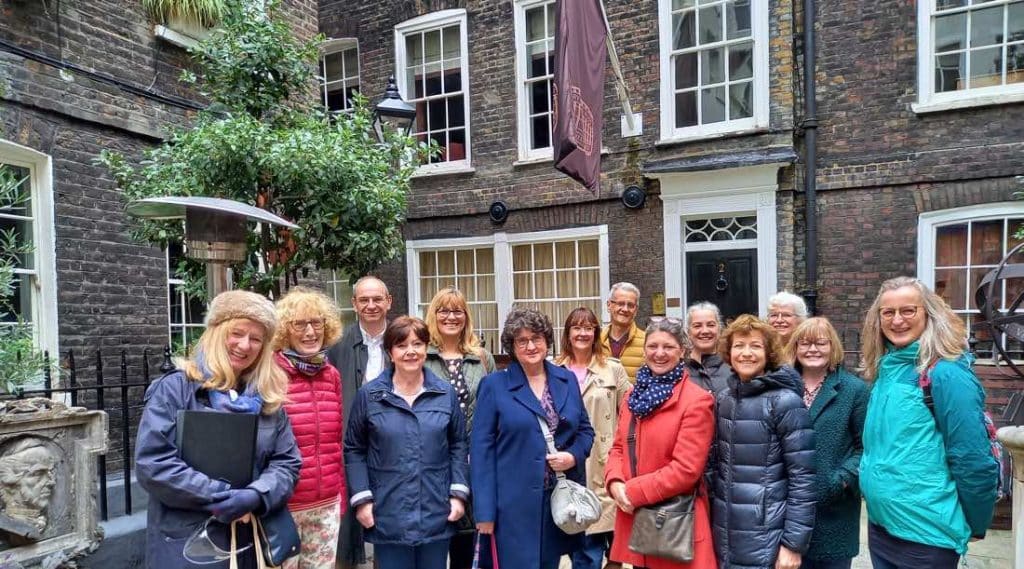 It was a happy bunch of 13 nurses, including their husbands and friends, who gathered at Green Park Tube at the start of the walk led by Maureen and her husband.  The weather was fresh, if not brisk, for our adventure into the history of the area.

The title of the walk was “Women behaving badly in St James’s”.  Who would have thought there were so many women who could be described as badly behaved?  However, as Maureen pointed out it wasn’t necessarily that they were bad, just that society in their time disapproved. Often, they were in fact brave, tragic or pioneering.

The delight of the walk was that Maureen was so knowledgeable and led us into tiny alleys, nooks, and crannies of St James’s, which you would never have known existed without her research. Down a secret passage we discovered the Stafford Hotel, where the amazing ex nurse and spy Nancy Wake lived. Having survived working for the French Resistance and SOE (Special Operation Executive) she lived out her days mainly it seems in the American bar!

We progressed to see the houses occupied by the Spencer family including Lady Diana and the home of Winston Churchill’s mother Jenny Jerome whose husband Randolph, died of syphilis.  She married twice more, finally dying apparently having tripped and fallen in her high heels. A warning to us all.

The walk covered Clarence House, St James’s Palace, Marlborough House, home of the Notorious Sarah Churchill, Duchess of Marlborough and also Nell Gwynn’s house at 79, Pall Mall.  En route we took in famous shops and hostelries including Berry Bros for wine and Lock and Co. for hats and Jermyn Street, which the husbands were particularly interested to see. At St James’s Square we came to the home of Ada Lovelace, an overlooked woman who was the founding mother of computing. Her house was near that of Lady Astor, the first female sitting MP and close to the memorial to WPC Yvonne Fletcher, killed in the Libyan Embassy siege.

So many remarkable women who Maureen brought to life with her in-depth knowledge and humour.  We ended the walk at the statue of Florence Nightingale whose only bad behaviour was standing up to the establishment and taking to her bed for 11 years in later life.  The walk was really fascinating and we all enjoyed meeting and chatting to each other as we learnt about these incredible individuals.