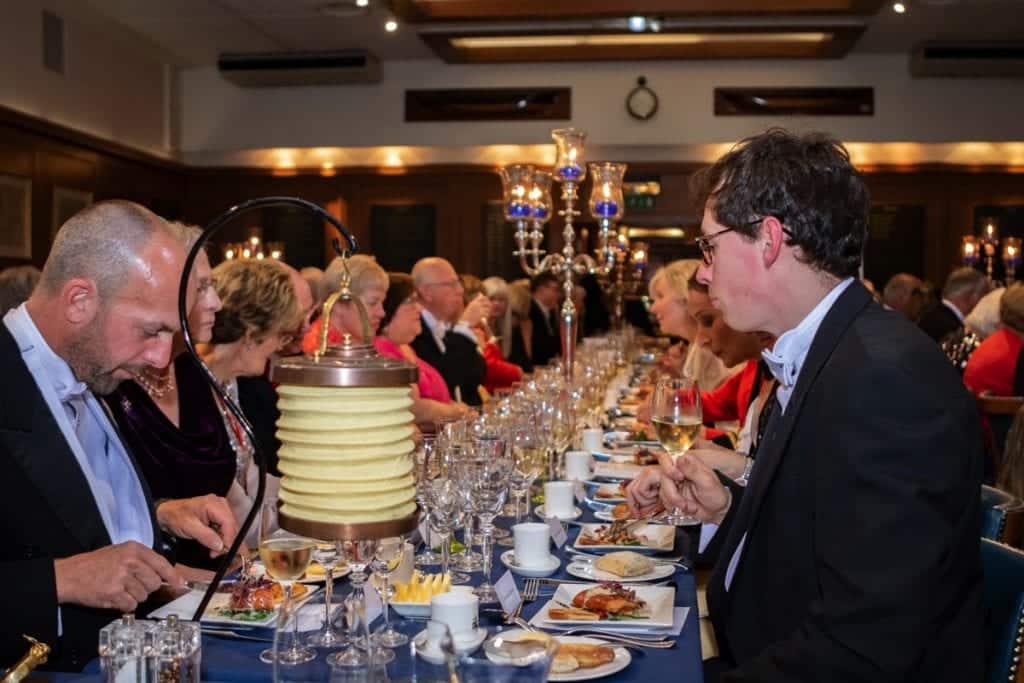 Our third anniversary banquet took place on Friday May 10th.  This year we were very privileged to be able to hold it on board HQS Wellington moored on the Thames.  Built in 1934, she served with distinction as a convoy ship in the North Atlantic during the second World War and is now the home of the Honourable Company of Master Mariners.

We were again treated to a Guard of Honour by the dismounted troop of The Light Cavalry Honourable Artillery Company who looked resplendent in their red and gold uniforms.  They added a wonderful sense of occasion.

Prior to the banquet, our new Master, Elizabeth Clare Turnbull was installed by the Honourable Clerk, John Allen.  Following the robing of the Master by Upper Warden, Frances Davies, Elizabeth swore the Master’s oath and the Nurse’s lamp, a symbol of fellowship, was handed to her by the outgoing Master, Helen Pickstone.  A special blessing, written by the Honorary Chaplain, Rev’d Canon Charles Pickstone and which had been commissioned by the incoming Master was said.

The dinner menu comprised a fish starter, followed by beef with vegetables and a selection of desserts, all accompanied by excellent wines.  During the meal the now traditional Passing of the Lamp took place.

The theme of the Master’s speech was longevity.  She reminded us of past nursing traditions – some of which have found their ways to our domestic lives!  Elizabeth also acknowledged the contribution made by all nurses, particularly those at the beginning of their careers and those who have given long service.

Our guest speaker Murray Craig, Clerk of the Chamberlain’s Court, regaled us with amusing anecdotes about some of the Freedom Ceremonies he had conducted.  He mentioned some household names and had props to elaborate; the tickling stick being used to great effect!  Helen was presented with a gift in recognition and thanks for her service to The Guild during the past twelve months.

The evening combined the Livery traditions of ceremony and fellowship.  It was a very special occasion, marking The Guild’s achievements as well as looking forward to the next year and beyond.