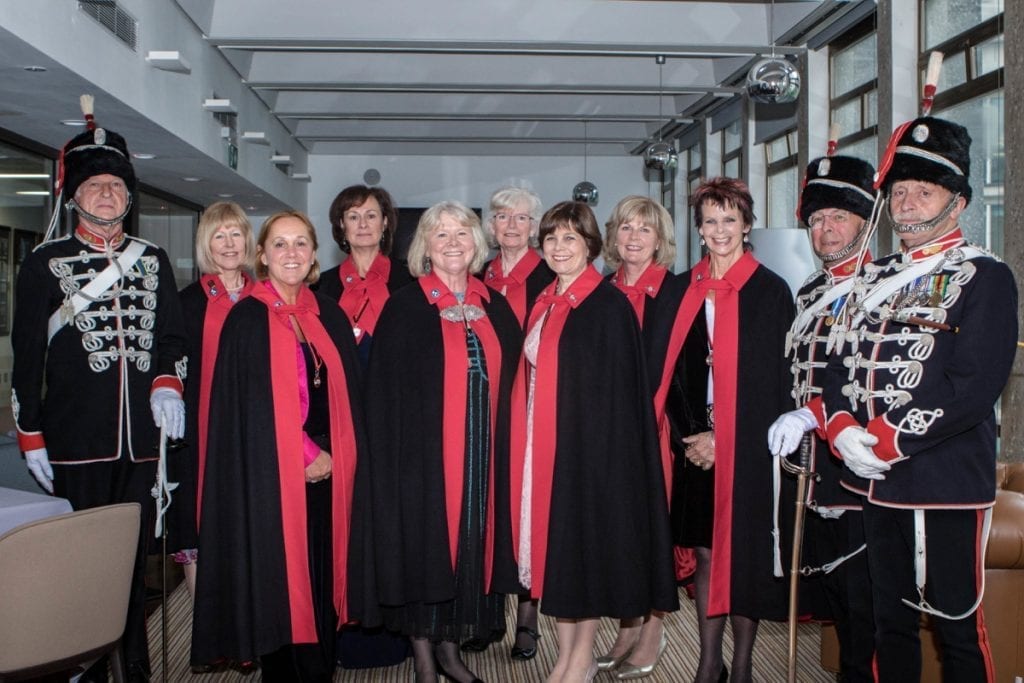 The Guild of Nurses celebrated its second anniversary on Friday 11th May with a splendid formal banquet, held at Guildhall. The occasion was greatly enhanced by the Guard of Honour formed by the dismounted troop of The Light Cavalry Honourable Artillery Company. A wonderful surprise for all!

We were very pleased to be able to welcome as guests, the Master of the Worshipful Company of Apothecaries’ Professor Charles Mackworth-Young and his wife Lady Iona Mackworth-Young and to entertain our sponsoring Alderman, Dr Sir Andrew Parmley . We were honoured and delighted that they were all able to join us.

The Installation of the new Master preceded the banquet. In front of this esteemed company, Freemen and their guests, Master Helen Teresa Pickstone was installed by the Honorary Clerk Mr John Allen. The Master was then robed by Upper Warden Elizabeth Turnbull and read the Master’s oath to the assembled company. The Nurses’ Lamp was handed to Helen by Foundation past Master Brenda Griffiths as a symbol of unity. It was a moving and solemn ceremony and the Master, accompanied by the Master’s Chaplain, Upper and Middle Wardens and the Foundation past Master were escorted to their places by the Honorary Beadle Martin Whitehead to the tune of “Scipio”.

Following a delicious dinner of monkfish, venison and summer pudding, the lights were dimmed and the Nurses’ lamp was blessed by the Master’s Chaplain, The Reverend Stephen Stavrou. The now traditional ceremony of the passing of the Nurses’ Lamp then took place.

Mr Paul Jagger, Court Assistant, the Worshipful Company of Information Technologists entertained us with a humorous and informative speech about City tradition and the path to attaining Livery and  was presented with one of the distinctive red and black Guild umbrellas.

The Master’s speech acknowledged the achievements of the past year, the plans for the year to come and thanked the Foundation Past Master for her considerable contribution to the Guild. A framed certificate was presented to Brenda in recognition of her two years in office as Foundation Master. With prompting by our sponsoring Alderman, we all sang “For she’s a jolly good fellow” – a fitting musical tribute!

The evening combined the tradition of the City and was a joyful occasion full of laughter, conversation, ceremony and friendship. A wonderful celebration for us all as we look forward to the year ahead and the Guild’s continued progress.

(The photographs from the Banquet are in the Freemen's Gallery.)